How Vegan-Friendly Is Budapest Really? 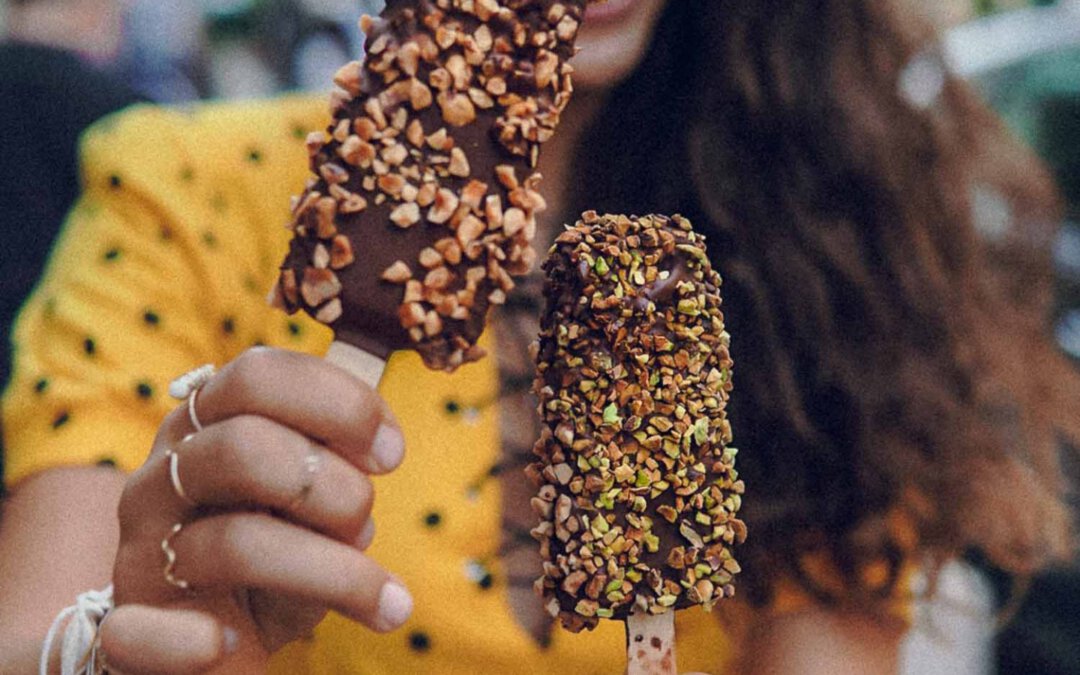 As you can see from the title, I traveled to Budapest with a mission. I wanted to find out how vegan-friendly the city has become in 2018. From my community, I had grasped the idea that the Hungarian capital is a vegan mecca. As blatant as Berlin? Unfortunately not. Nevertheless, there are some must-see spots that I presented in this post.

In Budapest the motto is: All or nothing. Vegan options? Nope. If you want to eat out as a vegan, you should visit a fully vegan or vegetarian restaurant. Unlike most other cities, most of the restaurants in Budapest have not responded to the growing demand for vegan dishes. There is, however, a growing number of vegan restaurants spread across different parts of the city.

No other city have I visited offered so many burger restaurants. In general, the Hungarians seem to be very fond of fast food. Next to the numerous burger stalls, there are, among other things, a purely vegan pizza stand, a purely vegan bakery and quite a few canteens. Canteens? In my opinion, many of the vegan restaurants in Budapest look like school cafeterias, as this concept seems to be very popular. In such „canteen“ restaurants you can mix & match your meal from a selection of various dishes, which are presented in form of a buffet in front of you. You pay either by weight or type and number of food.

The advantage: fast and cheap.

The downside: Not quite as fresh and classy as in traditional restaurants.

Conclusion: You should try both vegan burgers (Tip: Las vegans), as well as „canteen“ restaurants (such as Vega City) to form your own opinion. For me personally, the dishes were usually too greasy and heavy on flour and substitute products.

In the following, I will present a few of my favourite places in Budapest. 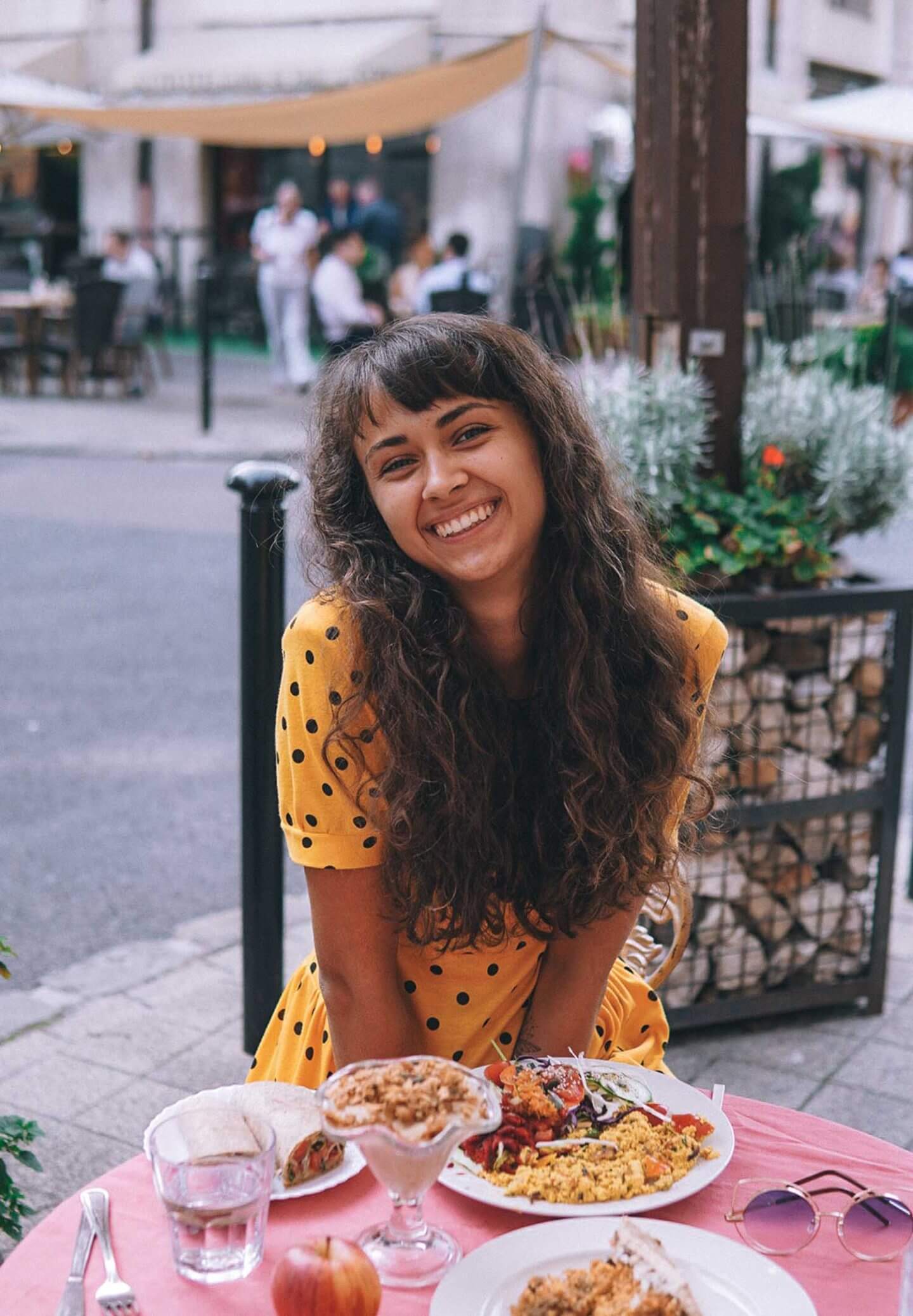 This small but fine café is located a few streets below the famous „Fisherman’s Bastion“ and offers a relatively large number of dishes in the „canteen“ style. From scrambled tofu to buckwheat tortilla to cinnamon rice pudding, there is everything you need for an extensive brunch. The service was very friendly and the food was excellent. However, the cafe is a bit expensive for Hungarian standards. For 2 people including drinks, we paid just under 22 €.

Our favorite: The tortilla casserole.

Anyone who likes raw food and wants to do something good for his body after all the vegan fast food can visit Slow Foodiez. The café offers a variety of weekly offers and the portions are decent. The green smoothie bowl tasted like a delicious dessert. Our only complaint was that there was no fresh fruit on the smoothie bowl or in the granola we ordered. For me, that’s a must!

Our favorite: The raw apple crepes with an almond-marzipan filling.

Despite the somewhat strange and difficult to remember name, this restaurant turned out to be an absolute gold find. The all vegan menu offers a wide selection of traditional Hungarian food as well as various vegan dishes. We ordered the grill plate for 2 and barely managed to eat everything. Tofu, breaded „cheese“, seitan steaks, steamed vegetables, mashed potatoes, rice with peas and 2 delicious dips gave us a unique culinary experience. I was 100% satisfied with our order and would have liked just a bit more spice (we ordered some extra chilli).

Our favorite: The vegan ice cream at the entrance of the restaurant as well as the traditional cakes and pastries in the showcase.

Overall, it was much warmer during my stay in Budapest than in Germany. Therefore, cooling down in form of extremely delicious chocolate-covered nut-sprinkled Ice Pops was much needed. I think I do not have to explain further why we are so excited about this place. Also, the acai bowls and the homemade granola used as a topping taste great. The only downside: for the bowls, disposable dishes are used. Luckily, as we found out, the bowls are made of compostable materials. 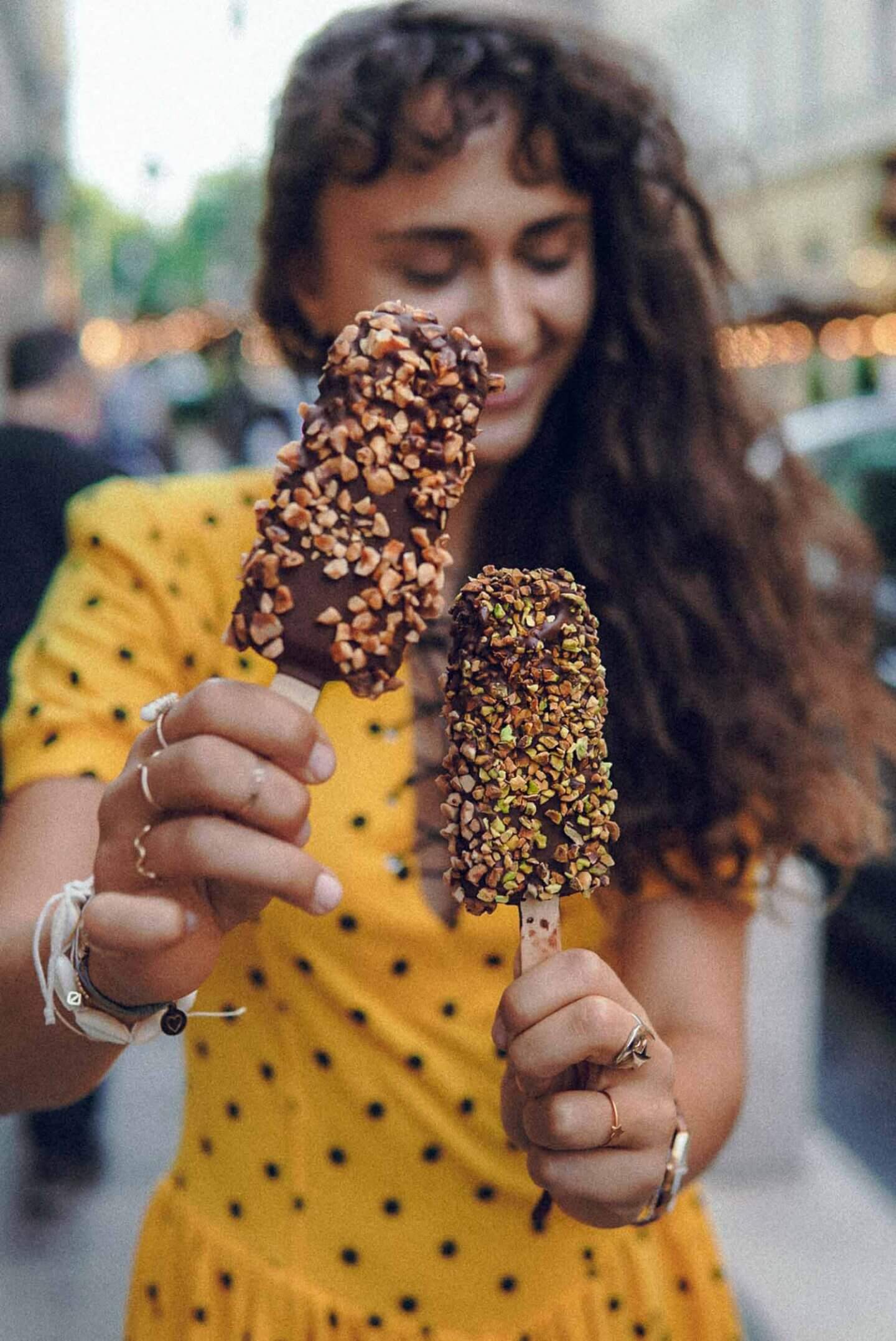 Never in my life have I seen a vegan pizza restaurant. It is only a stall in a courtyard and not a real restaurant, but the pizza is excellent. The dough is wonderfully fluffy and you can add any ingredients of your choice. However, the only downside is the enormously high salt content. The spinach pesto was also slightly oily. I deliberately ordered my pizza without oil and was very happy with it. Extra arugula and fresh tomatoes counter-balance the salt content.

Our favorite: ice-cold cider at the bar next door. 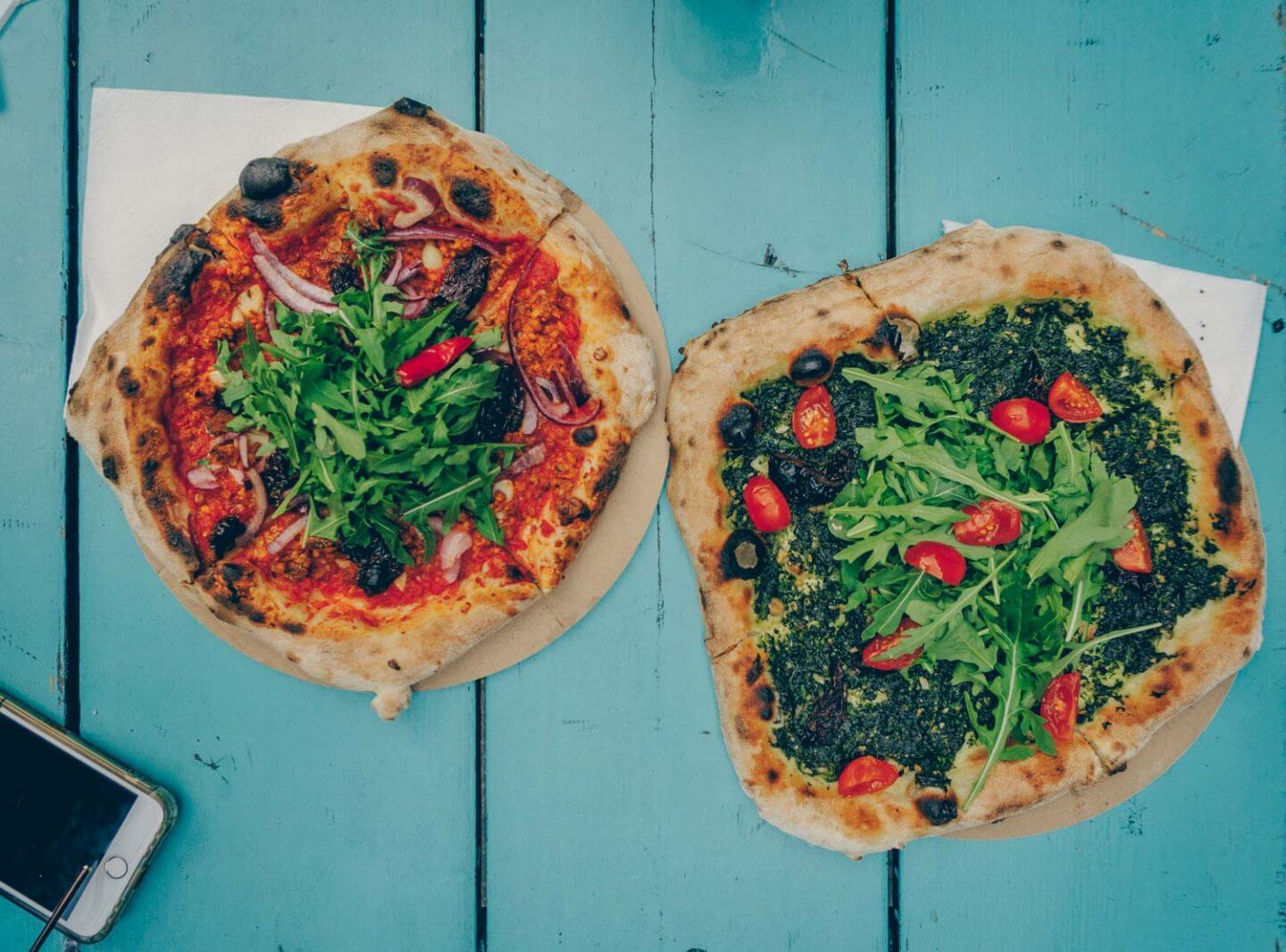 Other restaurants we visited:

Before each of my trips, I ask my community for recommendations and receive lots of messages from you. At this point: a big thank you to each of you! Some have written what looked like an A4 page of text. I really appreciate your elaborate tips and always read all your direct messages and comments!

Unfortunately, couldn’t visit all the restaurants you recommended due to a lack of time. Nevertheless, I have noted down all your tips and marked them on Google Maps. On my next trip to Budapest I will target some of the following spots:

Finally, a tip for all second-hand fans, because I was asked a few times on Instagram. There are many vintage shops in Budapest, but they are quite expensive. The items are carefully selected and the selection is usually very large. Just search for „vintage“ on Google Maps when you’re there and the stores will be displayed. If you prefer to hunt for bargains, you can look out for small shops while you’re strolling through the streets. If you are lucky you can make bargains for under 1 € in these „Real Vintage“ shops. There are many of them, so just keep an open eye!

Feel free to comment your favorite restaurants or vintage shops under this blog post, if there’s something I have forgotten. Enjoy traveling & feasting! 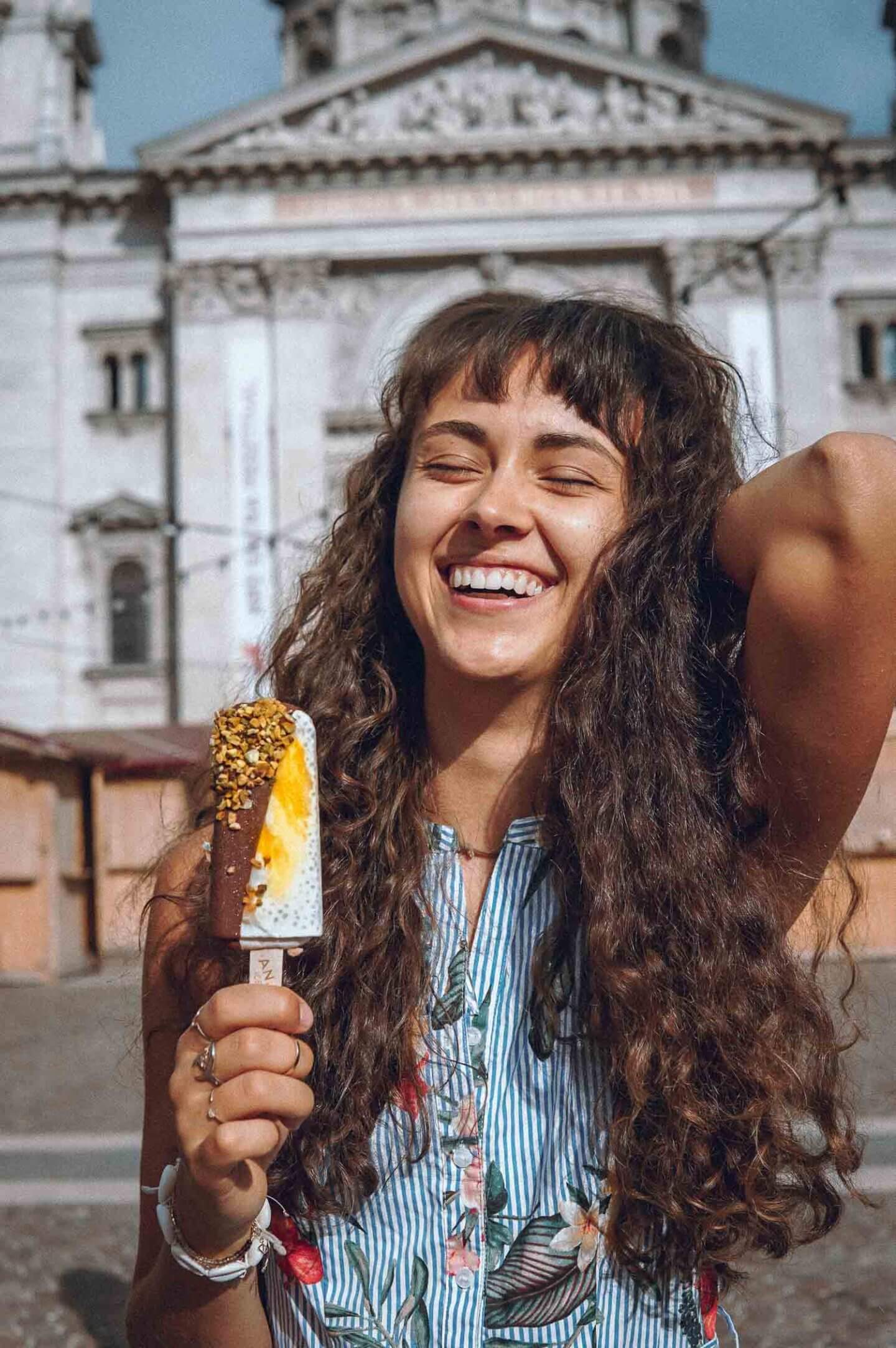